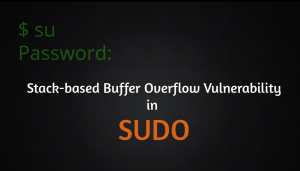 A new vulnerability was discovered in the sudo utility which allows an unprivileged user to gain root privileges without authentication. CVE-2019-18634 is classified as Stack-based Buffer Overflow(CWE-121).

This flaw affects all Unix-like operating systems and is prevalent only when the ‘pwfeedback’ option is enabled in the sudoers configuration file. pwfeedback provides visual feedback(* for every key press) when a user inputs the password.

An attacker can exploit this bug by triggering a stack-based buffer overflow. When sudo prompts for a password, a large input is passed to it via a pipe which can overflow the buffer to result in a Segmentation Fault. A user can also craft the input in such a way that root privileges can be obtained.

The advisory points out that there are two flaws which contribute to the vulnerability:

If we try to write to the read end of a unidirectional pipe, a write error is reported. A line is erased on write error, but the failure to correctly reset the remaining buffer length can be used to cause a stack-based buffer overflow.

How to check if you are vulnerable?

Users can check if pwfeedback is enabled by running the following command:
sudo -l

The sudoers configuration is affected if pwfeedback is listed in the “Matching Defaults entries” output.

An unprivileged user can escalate to the root account by overflowing the buffer.

The vendor has released an update to mitigate the vulnerability.