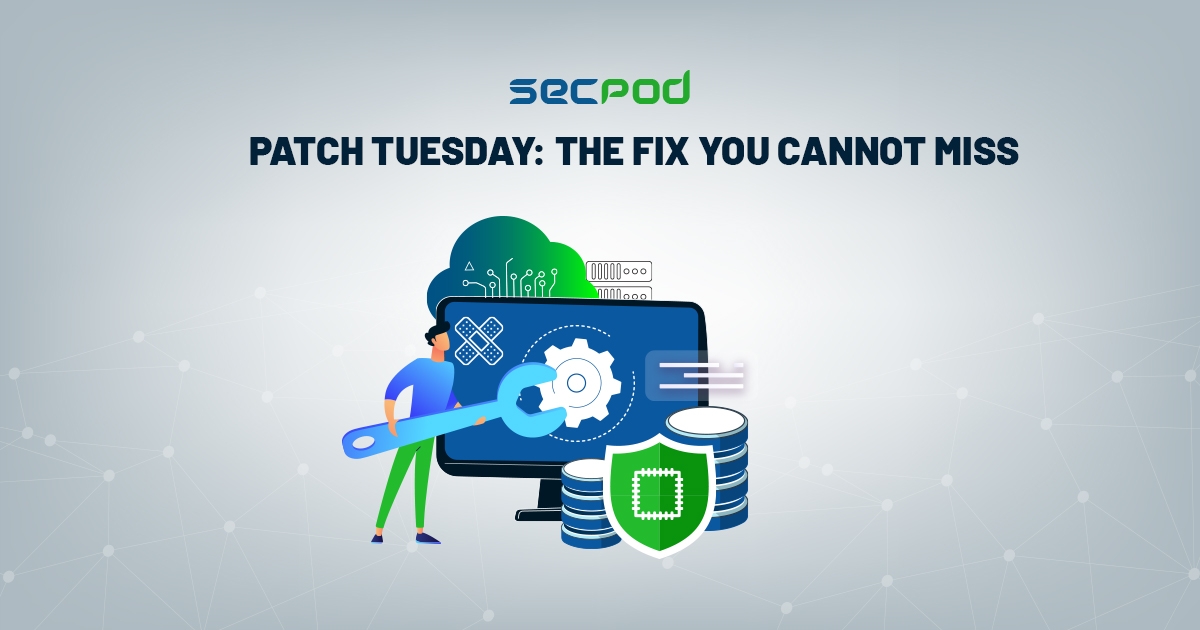 How many times have you blissfully ignored the update notification and clicked on “remind me later”? Yes, in the busy life, the severity of the updates goes unnoticed, and it often becomes the Achilles heel in the ‘trojan’ war. Patching and securing the endpoints has become a supreme task over the years, and the tiniest negligence can cost you irreparable loss. We need to know what a patch is before going further.

The Fundamental Understanding of Patch

A patch is nothing but a fix to mend the drawback. Patching in IT security is an inevitable task as it heightens network security. The security patches address vulnerabilities at any probable endpoint and make sure the system and the user experience the most up-to-date protection against cyberattacks.

We have ‘Independence Day,’ ‘Human Rights Day,’ ‘Mother’s Day’:- a day to celebrate everything and everybody. Similarly, the second Tuesday of every month is an eventful day in the life of every IT admins. That’s the day they keenly look forward to. Patch Tuesday is the day when Microsoft releases software patches for its software products.

The network admins were forced to deal with all levels of chaos and confusion when the patches were released on an unpredictable schedule. Back in 2003, Microsoft established a schedule for its security updates, which brought in patch observation and deployment plans into every IT administrator’s monthly schedule. The process serves to maintain software systems up to date.

Why Tuesday and not any other day of the week?

Tuesday was chosen as the favorable day of the week to maximize the time available before the next weekend as Microsoft was always receptive to any issues that came after each patch Tuesday. Despite being the first working day of the week, Monday was left behind to address any unexpected problems that might have come up in the preceding weekend.

How about  An Unexpected Vulnerability?

In case of an unexpected vulnerability, Microsoft releases an emergency software modification known as the out-of-band fix. This occurs if the thread is severe and is actively prone to exploitation.

The Journey From Patch Tuesday, Exploit Wednesday to Uninstall Thursday 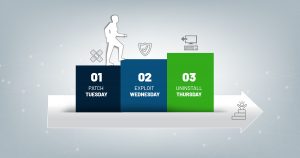 ‘Exploit Wednesday,’ or ‘Zero-Day-Attack’ is a term that needs to be considered and understood alongside Patch Tuesday. Exploit Wednesday is when the cybercriminals have analyzed the details from Tuesday and deliver code to exploit the systems with unfixed patches. The Exploit Wednesday is always followed by ‘Uninstall Thursday,’ the day you realize what precisely from the patch Tuesday is causing issues at your endpoint and understands the need to uninstall the update to get back to normal. Based on the intensity of the exploit, it is essential to deploy them without any delay. But remember, the process is never over with one day; it’s a continuous toil from deploying the patches to ensuring the shield of protection in all possible ways.

How do you determine the severity of the vulnerability?

As soon as the patches are released, Microsoft issues a bulletin with complete details of the released patches with each vulnerability rating. The severity rating represents most to least severe;

CRITICAL: The vulnerability that has a severe chance of exploitation and can lead to code execution with absolutely no interaction on the part of the user. Hence, it requires a fix without delay.

IMPORTANT: The vulnerability can exploit the integrity and confidentiality of the organization/user.

MODERATE: The vulnerability is mitigated significantly by factors such as authentication requirement and applicability to the non-default configuration.

LOW: All other minor vulnerabilities that can affect the system security.

It’s never recommended to ignore the software patches, be it the most severe or the least, as it can cost more than what an organization can afford to pay, its reputation, the trust built over the years, and much more. Here are few instances;

Yes, it is the harsh truth that happens in and around the world due to a not so minor ignorance. Unpatched software remains the root cause behind nearly 60% of the data breaches in the past few years.

The above are just two such incidents, but there are thousands of such incidents that came bright to light and few which went unexposed. Hence rather than risking your hard-earned money, reputation, and customers, it better to run those patches and updates without fail.

SanerNow patch management software is an end-to-end automated patching tool that will protect your network from all unexpected and critical vulnerabilities. The software automates everything from scanning, identifying missing patches, deploying them on enterprise computers to creating insightful reports. It provides rapid and efficient support for all the latest updates, including Patch Tuesday ones, within 24Hrs. With SanerNow, you can also choose to rollback the deployed updates if needed.