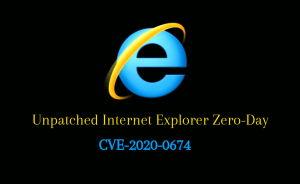 Microsoft has released an emergency advisory for an unpatched zero-day vulnerability in Internet Explorer. Microsoft is also aware of limited targeted attacks in the wild. This vulnerability was discovered by Clement Lecigne of Google’s Threat Analysis Group.

The fix for this zero-day would be released as a part of the next Patch Tuesday updates. And until then, the vulnerable Internet Explorers would be open to attack. Microsoft has also added that, this vulnerability can be exploited when any website utilizing jscript is accessed using a vulnerable IE browser.

Update:
360 security experts have attributed the active exploitation of CVE-2020-0674 to an APT group named DarkHotel (APT-C-06). DarkHotel APT is known to have an East Asian background and has been operating since at least 2007. Their main targets include government organizations and enterprises.

According to Microsoft, CVE-2020-0674 is a remote code execution vulnerability in Internet Explorer due to improper handling of objects in memory by the scripting engine. Successful exploitation could allow an attacker to execute arbitrary code in the context of the current user. If the targeted user has administrative privileges, then the attacker is granted administrator rights after exploitation, which he can use to install programs; view, change or delete data; or create new accounts with full user rights and completely compromise the target system.

Any application which supports embedding Internet Explorer or its scripting engine component would be a potential attack vector for this vulnerability. An attacker can host a malicious website designed to exploit the underlying vulnerability in Internet Explorer or craft HTML documents, PDF files, Microsoft Office documents, or any other documents which support embedded Internet Explorer scripting engine content. A user can be tricked into visiting the malicious website by clicking on links or convinced to open crafted files delivered through spearphishing emails.

An attacker can remotely execute arbitrary code on the target system and take control of the entire system in some cases.

We are not aware of any updates released by Microsoft to fix the vulnerability. However, Microsoft has provided a workaround which is recommended to be applied by users who are at elevated risk. Implementation of this workaround could result in reduced functionality for components or features that rely on jscript.dll.

For 32-bit systems, enter the following command at an administrative command prompt:

For 64-bit systems, enter the following command at an administrative command prompt:

NOTE: This workaround must be reverted before installing any future updates.

Update:
0patch has provided a micropatch for CVE-2020-0674 which acts a ‘kill switch for vulnerable jscript.dll’. This patch is also known to avoid the negative side effects of Microsoft’s workaround. When Microsoft releases a patch for this vulnerability, it will be superior to the enabled micropatch.

We will continue to monitor this vulnerability and update as and when a fix is available. It is suggested for users to be extremely cautious before opening any suspicious links or documents which might trigger the vulnerability