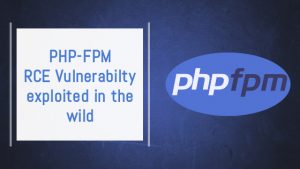 PHP FPM (FastCGI Process Manager) is an advanced PHP FastCGI implementation with added features and is very useful for heavily loaded sites. A vulnerability was discovered in PHP FPM which has been exploited in-the-wild.

In this case, the flaw exists in env_path_info in file sapi/fpm/fpm/fpm_main.c which contains a certain pointer arithmetic which assumes that it points correctly to the php_script. The absence of verification of the existence of path or file leads to storing of an incorrect pointer value in ‘path_info‘ variable.

The advisory explains that in case the nginx configuration looks as above, then a crafted url with newline character can be used to break the regex in ‘fastcgi_split_path_info‘ directive which leads to code execution. This type of configuration is not uncommon. The value of path_info[0] is set to zero going further in the code, FCGI_PUTENV is then called. Here, an attacker can use a crafted url with a carefully chosen length of the URL path and query string to modify path_info to point to the first byte of _fcgi_data_seg structure. When zeros are added to this, the pointer char* pos moves backwards and FCGI_PUTENV overwrites some fast cgi variables and other data with the new script path. A set of config values with a fake PHP_VALUE fcgi variable can be used for remote code execution.

A certain set of pre-conditions are to be met for the server to be vulnerable:

An attacker can exploit the vulnerability to execute code remotely.

The vendor has fixed this vulnerability with the release of PHP 7.3.11 (current stable) and PHP 7.2.24 (old stable). Those using nginx with PHP-FPM , we urge users to update their machines with the installation of latest patches.