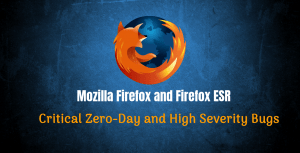 Mozilla released two consecutive security advisories to address the vulnerabilities in Firefox and Firefox ESR. The latter is a critical advisory claiming that Mozilla is aware of in-the-wild attacks for a type confusion vulnerability. However, there are no details about the specific threat actor(s) abusing the aforementioned vulnerability.

Mozilla’s release of Firefox version 72 includes protection against browser fingerprinting. Browser fingerprinting is an incredibly accurate method that allows the identification of browsers and tracking of online activity. This method can also be used by websites to collect information such as browser type and version, operating system version, active plugins, timezone, screen resolution, etc. Mozilla states that

CVE-2019-17026 is a security issue that has been classified as type confusion (CWE-843). The flaw exists in IonMonkey, the JavaScript JIT compiler for SpiderMonkey, the first written JavaScript engine. The type confusion issue arises due to incorrect alias information in IonMonkey for setting array elements. This vulnerability can be abused by an attacker to execute arbitrary code or cause a potential crash.

CVE-2019-17018, CVE-2019-17019 , and CVE-2019-17020 are the other moderate severity bugs fixed in Firefox, which could retain word suggestions in private browsing mode, execute Python files on download and bypass restrictions of the Content Security Policy respectively.

SecPod Saner detects these vulnerabilities and automatically fixes them by applying security updates. Download Saner now and keep your systems updated and secure.