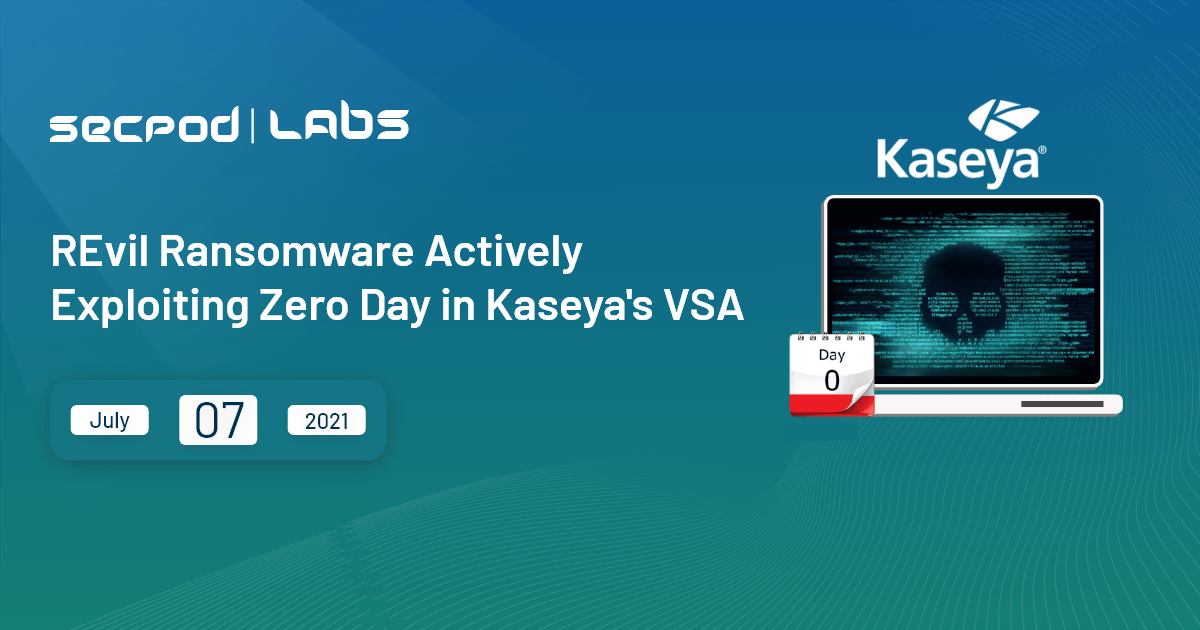 Kaseya is a US-based organization that provides IT and security management solutions for managed service providers (MSPs) and small to medium-sized businesses (SMBs) worldwide. One of its tools, called Kaseya’s VSA, is under active exploitation and used as an attack vector to install REvil ransomware worldwide. Kaseya VSA (Virtual System/Server Administrator) is software that provides a centralized console to monitor and manage endpoints, automate IT processes, deploy security patches, and control access. It is available either as a hosted cloud service or via on-premises VSA servers.

REvil (Ransomware Evil), also known as Sodinokibi, operates as ransomware-as-a-service (RaaS), meaning anyone can buy the service and use the ransomware payload and infrastructure to manage the victim communications distribution of decryption tools. REvil ransomware operators prefer to recruit affiliates to distribute the ransomware instead of attacking companies directly and split the revenue generated from ransom payments. Like many other ransomware families, REvil maintains a website where they publish details of their latest victims and the files collected from them. On their website page called ‘Happy Blog,’ REvil has confirmed that they were behind the attack against Kaseya and has demanded a ransom of 70 million dollars to decrypt files on all organizations affected by this attack.

US Cybersecurity and Infrastructure Security Agency (CISA) and Federal Bureau of Investigation (FBI) have shared advisory for managed service providers (MSPs) and their customers impacted by this REvil ransomware attack. The MSPs affected by the attack are advised to check their systems for signs of compromise using Kaseya’s detection tool and enable multi-factor authentication (MFA) on as many accounts as possible. MSPs should also implement allowlists to limit access to their internal assets and protect their remote monitoring tools’ admin interface using firewalls or VPNs. The complete list is mentioned below.

CISA and the FBI also advise affected MSP customers to:

Security researchers at Huntress Labs have provided details on initial indicators of compromise for this attack.

This has been the largest ransomware attack on record, affecting close to 1500 of Kaseya’s clients spread across 17 countries. The full impact of the attack is still being analysed by cybersecurity professionals globally.

Huntress Labs has been closely monitoring this situation as it unfolds, reported that 30 MSPs were affected, consequently affecting 1000s of dependent businesses.

Some events as per news reports:

As per Kaseya’s status webpage:

“All VSA SaaS servers will be put into maintenance mode. We apologize for any inconvenience. – Kaseya Cloud Operations Team”