Fox Kitten Campaign has hit the headlines recently, but has a longstanding history of cyber espionage. Researchers from ClearSky discovered a three-year-old campaign targeting a wide range of organizations around the world. In a detailed report, the researchers added that this could be Iran’s most continuous and comprehensive campaign known.

The campaign, first revealed by Dragos and named Parasite, is known to have strong allies with Advanced Persistent Threat(APT) groups like APT33-Elfin, APT34-OilRig, and APT39-Chafer. The main objective of this campaign is data exfiltration. The campaign has used various tools and techniques to achieve its goals.

Unpatched VPN and RDP services have been significant targets for this campaign. The Iranian attackers behind this campaign are capable of exploiting vulnerabilities within a few hours or days of their publication. Though not observed before, the infrastructure used in the campaign can be used to deliver destructive malware such as ZeroCleare and Dustman.

Initial Infection
The main attack vector for this campaign is the unpatched flaws in VPN servers. The vulnerabilities which were exploited are: 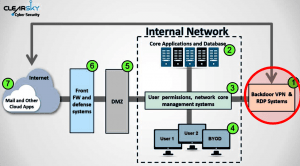 Exploitation of these vulnerabilities grants attackers the access to targets and their core systems. The attackers download different files, move laterally in the network and try to gain a foothold.

Privilege Escalation and Persistence Mechanisms
After successful infection using VPN vulnerabilities, the attackers try to escalate privileges using a tool named Juicy Potato. The attackers ensure they are not running on virtual environments before taking any step further in the infection chain. The attackers also steal users credentials using ProcDump and Mimikatz. Once they obtain the passwords of the users, attackers abuse the settings of  the “sticky keys” accessibility tool to further elevate their privileges. In order to achieve persistence on the target, the attackers create a special local admin user. This allows attackers to maintain high privileges even when the password of the main user on the target gets changed.

Lateral Movement
The next step in the attack chain is to spread the infection across the network. A range of tools such as STSRCheck, PORT.EXE, Invoke the Hash, POWSSHNET, are used to map servers and open ports, perform specialized scan for servers and predefined ports, and also perform “pass the hash” attacks.

Deployment of Backdoors
POWSSHNET backdoor is installed on targets to open an SSH tunnel. After successful installation, the attacker can connect using RDP to the target computer to collect sensitive files. 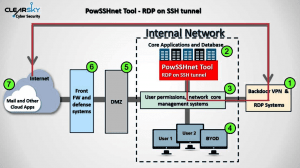 The attackers were also seen using a tool named “cs.exe” to create another backdoor as an additional communication channel.

Data exfiltration
The attackers behind this campaign mainly aim at stealing confidential information from targets. The campaign has used a plethora of tools to maintain access to the servers inside the targeted organization which helped to establish the foothold in the organization and exfiltrate stolen files. Two kinds of webshells were utilized to achieve this. Firstly, a webshell was placed inside the organization accessible to the network and another external webshell was used to upload files. The exfiltrated data is filtered and compressed into WinRAR or 7-ZIP files and then sent to the attackers.

Organizations must ensure the safety and security of the systems by:
1. Minimizing the exposure of the administration interfaces to the outside world.
2. Regularly updating the systems with released patches.
3. Educating individual users to follow security best practices.
4. Creating two-step authentication mechanisms to reach the corporate core systems.
5. Constant monitoring of active users and user permissions on systems.