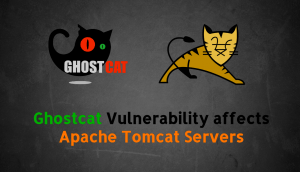 This flaw allows attackers to read or include any files in the web application directories of Tomcat. The impact is known to be much severe in cases where the application allows the uploading of files. An attacker can upload a malicious file, and then include it using the Ghostcat vulnerability. This could result in the execution of malicious code.

A number of researchers have published proofs-of-concept(1, 2, 3, 4, 5) for CVE-2020-1938. The figure below shows the disclosure of data present in the web.xml file on a vulnerable Apache Tomcat Server.

How to check if the AJP connector is used in the server environment?

If either is true, then the AJP connector is in use.

An attacker can execute malicious code and also read sensitive information from the configuration files and source code files of all web applications which run on Tomcat.

Apache has released fixes for this vulnerability in Tomcat.

If the AJP connector service is not in use:

If the AJP connector is not being used in the application, then the vulnerability can be fixed by directly upgrading Apache Tomcat to version 7.0.100, 8.5.51, or 9.0.31.

In case the upgrade cannot be handled, Chaitin advises following the steps below to disable the AJP Connector directly, or changing its listening address to the localhost:

3. Save the edit, and then restart Tomcat.

It is also recommended to use firewalls to prevent untrusted sources from accessing the Tomcat AJP Connector service port.

If the AJP connector service is in use:

If the AJP connector service is in use, then it is recommended to follow the steps below:

2. If upgrade is not possible, it is recommended to configure the “requiredSecret” attribute for the AJP Connector to set AJP protocol authentication credentials.
For example:
<Connector port=”8009″ protocol=”AJP/1.3″ redirectPort=”8443″ address=”YOUR_TOMCAT_IP_ADDRESS” requiredSecret=”YOUR_TOMCAT_AJP_SECRET” />

SanerNow detects and reports this vulnerability. Download SanerNow and keep your systems updated and secure.

Thanks for the detailed information and solutions about the GostCat.