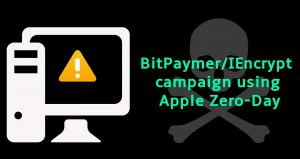 Apple released security updates a week ago which included a fix for a zero-day vulnerability. Morphisec discovered active exploitation of an Apple vulnerability by BitPaymer/IEncrypt campaign.

BitPaymer/IEncrypt campaign has been targeting various public and private sector industries spread across the U.S. This campaign uses spearphishing emails as its initial infection vector and delivers Dridex malware. BitPaymer/iEncrypt ransomware is known to encrypt data, apps and program files on the target machine.

The campaign utilized an unquoted service path vulnerability in Apple iTunes. The vulnerability resides in Apple Software Update utility.  Apple iTunes is obsolete on the new MacOS Catalina and is therefore not vulnerable. However, all the Windows machines running Apple iTunes and iCloud were open to attack.

An unquoted path vulnerability is a simple flaw where a path to an executable contains spaces and is not enclosed in quotations.

In such a case, the system interprets the path as shown below: 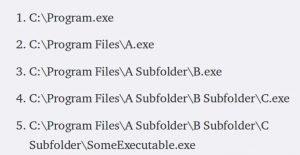 This allows an attacker to place a malicious executable in any folder or sub folder and execute it with SYSTEM privileges. Apple Software Update uses a scheduled task to execute the process. The ransomware attacks used a file named “Program” without any extension such as “.exe” to avoid suspicion. The system executed the maliciously crafted “Program” file instead of “Program Files” due to the absence of quotation. Researchers also reported that any malicious file named “Apple” or “Apple Software” placed in the Program Files directory could be used for exploitation. While this flaw can also be used to elevate privileges, there were no instances of privilege escalation attacks carried out by BitPaymer/IEncrypt campaign.

The major matter of concern here is that even when iTunes is uninstalled, Apple Software Update continues to run on the installed machine and requires a separate procedure to remove it. This vulnerability readily assists attackers in evading detection by security solutions. Most of the products are based on behavioral monitoring of the parent-child process on systems and when a legitimate process signed by a trusted vendor such as Apple executes a malicious child process, the risk rating given by AV products is low.

Apple had fixed this vulnerability with the release of security updates(detailed in our blog) for iCloud and iTunes for Windows last week. We hereby issue a gentle reminder to system administrators for applying these security updates on priority to prevent any instances of active exploitation.