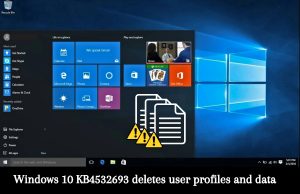 Microsoft released updates for Patch Tuesday a week ago. A few users who installed the updates encountered missing files and user profiles on their systems. Further investigation revealed that the culprit was Windows 10 update KB4532693. Microsoft has acknowledged the existence of an issue and is analyzing it.

What happens after installing KB4532693?

Several users have reported that settings, desktop, and Start menu boot in a default state as though a new account was created. Shortcuts pinned to desktop or taskbar were also missing.

That’s not all, the bug also deletes data from Documents, Downloads, and other user folders. There are reports of users facing boot failures and Blue Screens of Death (BSOD) too.

What TODO, when data is missing?
Microsoft has acknowledged the issue and is working on a fix. In the meanwhile, it is suggested to follow these guidelines:

1) Check for the presence of folders with a .bak or .000 in C:\users folder. If any of these folders show the presence of your data, it is suggested verify and to back up the data to an external drive or cloud.
2) Restart Windows 10 several times and check if the original profile gets restored.
3) In case the profile is not restored to normal with step 2, it is recommended to uninstall the update following the instructions mentioned here.