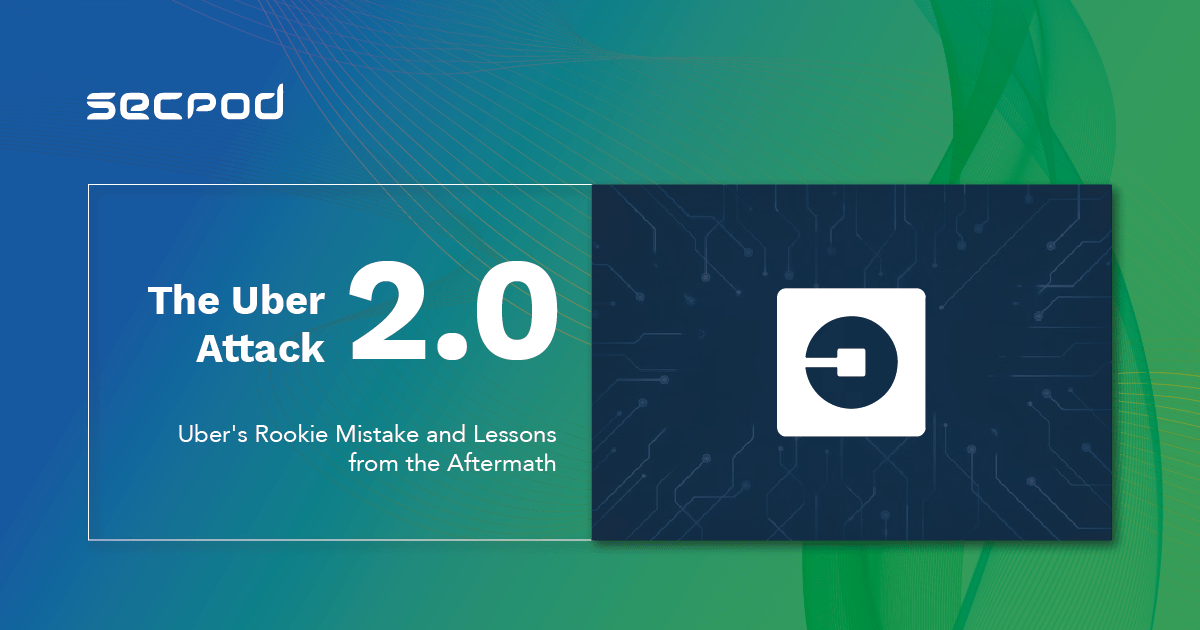 A simple message on a secure(*cough) internal channel saying YOU HAVE BEEN HACKED is a terrifying nightmare for all employees, especially security teams, in an organization. But that’s what happened to Uber, the ride-share giant. Again!

On September 15th, messages on Uber’s internal Slack and HackerOne channels from a staff account announced the entire network infrastructure of the company had been compromised. The employees clearly thought it was a joke, but this soon snowballed into widespread chaos, as messages from the IT team asking not to use the channels basically confirmed it.

This isn’t the first time Uber has been hacked, however. In 2016, Uber’s network was allegedly compromised, with sensitive user data being stolen and a ransom of 100,000$ paid to cover it up. After investigations, the ex-CISO of Uber is under trial for the alleged cover-up.

But more importantly, this alleged breach was a social engineering operation by an 18-year-old (not confirmed) who also seems to have some connection with another recent leak of Rockstar Games. And funnily enough, they also used Uber’s own HackerOne accounts to send out emails that contained their telegram handle. Soon, they also explained their modus operandi, on how they breached the ride-share giant.

More importantly, how weak was the organization’s cyber-defense if a simple social engineering attack could breach the entire network? Or was it Uber’s blunder that caused its downfall?

The Anatomy of The Attack

How and when did it happen?

With the recent tweet and announcement from Uber’s official channels, the worst had been confirmed.

Questions would be asked, explanations made, fingers pointed, and lessons learned.

Are People the Ultimate Cyber-risk?

Are people of an organization the biggest cyber risk? Social engineering (SE) is the simplest and, unfortunately, the most effective way through which threat actors get into an organization. SE is fairly common, and combating it, especially in huge organizations, is increasingly difficult.

So, to combat the aftermath (or to respond to the incident) and minimize its effects is why we have user access control and privilege management.

But storing user credentials, especially of high-access admins, is incredibly dangerous and, frankly, a rookie mistake on Uber’s part. With sensitive info stored carelessly, it becomes ridiculously easy for threat actors to exploit networks. And that’s exactly what has happened.

People aren’t the biggest cyber risk, but they are the gateway for every other risk to become dangerous.

So, who’s to be blamed here? The user who was socially engineered or the person or people responsible for the blunder of storing admin credentials?

It’s a question that’s very difficult to answer without knowing the entire picture. While both are responsible for the end result, the damage would have been greatly minimized if the right measures for storing sensitive information had been taken.

A lot of cybersecurity frameworks and policies explicitly suggest not storing admin credentials, and they do so for a reason.

The Uber attack will have ramifications, and the impact will be long-lasting. Lessons should be learned, and better measures must be taken to prevent such attacks. Or someone else will learn it the hardway.

Had the organization followed a strict cybersecurity framework, proper vulnerability management, and attack surface reduction, this article would not have been written.

Had the organization trained its employees against social engineering attacks, the chance of a cyberattack occurring would have been significantly lower.

Had there been enough care taken in storing sensitive user credentials, the damage would have been much lesser.

But these are the lessons for us to learn from the attack and its aftermath.

The Uber attack will be an eye-opener for organizations, CISOs, and their teams throughout the world. Even with great cyber-defense and MFA, simple mistakes can simply breach their organization by simplifying the work for the threat actor.

Cybersecurity best practices can go a long way in ensuring such attacks do not occur.

But for Uber, only time will tell how everything else plays out.