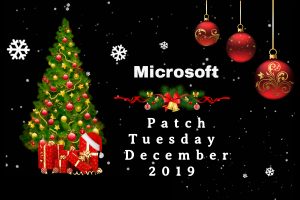 Even though Patch Tuesday seems to be rather light for Microsoft this month, it did not run short of zero-days. According to Microsoft, CVE-2019-1458 is an elevation of privilege vulnerability in Windows when the Win32k component improperly handles objects in memory. Successful exploitation could allow an attacker to execute arbitrary code in kernel mode and take control of the system. However, an attacker would first need to log on to the system to carry out exploitation.

Microsoft reported that this vulnerability was actively exploited. Researchers have pointed out that CVE-2019-1458 has been used in conjunction with a Google Chrome Zero-Day as a part of Operation WizardOpium carried out by attackers last month. For more information refer to our blog here.

CVE-2019-1468 is a critical remote code execution vulnerability in Win32k Graphics which allows an attacker to take control of a system with commonly used attack techniques. With a little social engineering, an attacker can convince a user to view a specially crafted website which exploits the underlying vulnerability. A user can be tricked into clicking on links or opening malicious attachments delivered through emails or instant messaging platforms. This issue was addressed by correcting how the Windows font library handles embedded fonts.

Another impactful vulnerability to be considered is CVE-2019-1471, a flaw which exists when Windows Hyper-V on a host server improperly validates input from an authenticated user on a guest operating system. This vulnerability allows execution of arbitrary code on the host operating system, when a crafted file is run on the guest OS. A security researcher, Dustin Childs adds that with the increasing dependency of modern computing systems on virtualization, such bugs are more to be seen in the threat landscape.

Strangely, Microsoft released an advisory for a vulnerability (CVE-2019-1489) in Windows XP, which has reached end of life. CVE-2019-1489 is an information disclosure vulnerability in Windows Remote Desktop Protocol (RDP) due to improper handling of objects in memory. Successful exploitation would allow an attacker to gain sensitive information to further compromise the system.

Microsoft mentioned in the advisory,
Microsoft will not provide an update for this vulnerability because Windows XP is out of support. Microsoft strongly recommends upgrading to a supported version of Windows software